Haüs of Growlers: A Great Set of Jugs

Texas craft beer is exploding. There’s no other way to put it. If you are one of the millions participating in this Texas beer renaissance, chances are that sooner or later you are going to run into Jake McKnight, or at least some of his handiwork. 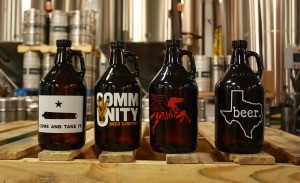 Just a few Lakewood’s designs offered by Haüs of Growlers.

Jake is the founder and owner of Haüs of Growlers, a North Texas-based company that puts unique images onto growlers. In case you’ve been living in a cave, a wholesale nfl jerseys growler is a 64 oz. jug, usually made of glass, used to transport beer from breweries, brewpubs, bars, and other filling stations to be consumed at home, the Homegate bed of your truck, in the bathroom at a wholesale mlb jerseys wedding, etc. The term “growler” is rumored to originate from the hissing growl of the CO2 escaping the lid as the beer sloshed around the buckets used to carry beer home from the pub.

Jake was kind enough to sit down with us D: and talk about the company and how it started. We met at LUCK at Trinity Groves, one of the many craft brew pubs in Dallas that carry and fill his growlers.

A colorful guy, to say the least, Jake is a tall, friendly and speaks through a thick East Texas twang. He came over and introduced himself, quickly to excuse himself to shake hands a give hugs to everyone who was working in the bar. He came back to join us outside on the front patio. 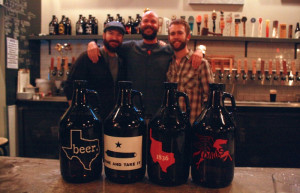 CSTX: “Jake, do you mind if I record the conversation?”

Haüs of Growlers started like so many other hair-brained ideas, while sitting at a bar.

“I wholesale nba jerseys was sitting at a filling station, Craft and Growler” Jake explains, “and I was just looking up at the growlers and I thought, ‘Why can’t we spice things up?’”

Apparently, there was no reason why he couldn’t. Jake “spiced up” the glass containers with original artwork, famous quotes and Texas-themed designs. 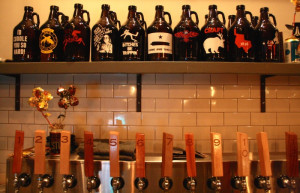 Just a few of the Haüs growlers available for filling at LUCK in Dallas.

After about four months, he was able to quit his other job and work on selling growlers full time.

The incredible boom in the Texas craft brew industry, along with demand to take home craft beer, (many of which aren’t available in bottles or cans) XML allowed the company to rise with the tide, though not for lack of leg work. Jake is at a brewery, festival, kick-off party, or other event most days of the week promoting the brand and supporting the Texas craft brewing community.

After almost two years, Haüs of Growlers products are sold in many locations all throughout Texas, though the bulk of growler sales are made at HausOfGrowlers.com, with around 50% of online sales shipping to the other 49 states.

Through partnerships with Tumbleweed TexStyles, Texowa, Kegerator.com and others, you can find growlers featuring original Texas artwork like the 1836 Republic of Texas, the Come and Take It flag, and a favorite of ours at CSTX, the Davy Crocket quote: “You may all go to hell, and I will go to Texas.” 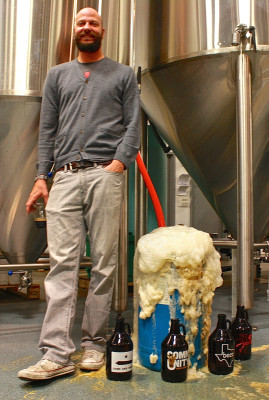 New designs are always in the Wimberley, works at the Haüs. One that Jake is particularly excited about is the new “coordinates” series. Growlers, t-shirts and other items will feature the latitude and longitude coordinates of cities throughout Texas.

CSTX: “So, right now at home, what’s in your growler?”

Jake: “I’ve got two. I’ve got one with Peticolas Royal Scandal Football and the other has Community Mosaic.”

CSTX: “If you went for tacos right now, where would you go?”

Jake: “Oh man, it’s that place, I don’t even know the name of it. It’s in that gas station no over there on I35 and Royal, I think. And they sell tacos in there.”

Growlers make great gifts. Go online at hausofgrowlers.com to find the growler that best fits you and your unique style.

CSTX: “So Jake, before we go, what were you doing when you were sitting at Craft and Growler and came up with the idea?”

Jake: “In the funeral industry. I was selling caskets and burial vaults to funeral homes.”

I guess the death industry is a pretty good place to start for a guy breathing life into the way we enjoy craft beer in Texas.