Franklin Barbecue has become legend, albeit a recent one. People travel from all over the world to wait in line for what is arguably the best barbecue in the world. The line itself has garnered almost as much attention as the food. It even has its own social media handles. The line is long and slow-moving (we waited for four and a half hours), but the smoky masterpiece at the end makes the wait well worth it. Everyone is equal at Franklin Barbecue and everyone has to wait in line. Kanye West, being the self-obsessed narcissist that he is, thought he was above waiting in the line. Well, he wasn’t. The staff at Franklin told Kanye that he had to head to the back of the line like everyone else. There is only one Franklin Barbecue customer that receives special treatment and that’s President Barack Obama, and even that was only for security reasons. So unless you happen to be the President of the United States (and we know most of you aren’t), you might want a few tips on how to get the most out of your stay in line. So here’s the first one… 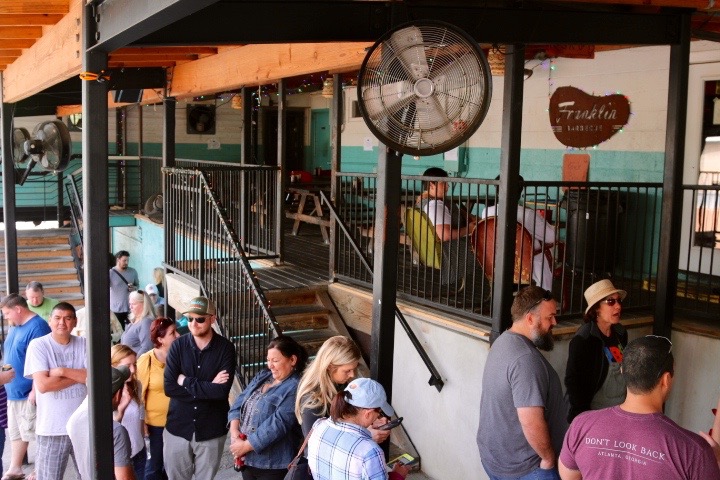 It’s a long line. Franklin doesn’t even open until 11:00am, but the line starts forming around 7:00 or 8:00 in the morning. The line grows and grows until the doors open and then moves slowly until they run out of meat. When it’s gone, it’s gone. The idea of waiting up to four hours for lunch is absurd to some. Almost every conversation I’ve had about the experience, both in person and on social media ends in the inevitable question: Is it really worth the wait? They would get the same answer from anyone who has ever waited the wait. Yeah, it’s definitely worth the wait.” It’s worth a much longer wait than what it actually is. If you’re not from Austin, it’s also worth whatever drive you had to make and however shitty your friend’s couch was that you slept on.

It’s worth it for a few reasons. The obvious one is the meat. It’s perfect barbecue. Both the brisket and the ribs are both the best I’ve ever had. I could tell you about the meat itself and the process, etc. but you’re much better off reading it from the buttloads of other people who know how to write about barbecue (I’m a Daniel Vaughn fan, myself). The less obvious reason is the badge of honor you earn by waiting in that line. Upon wiping the glorious fat from your chin and wadding up your butcher-paper, you have achieved something that thousands, nay, fafillions of people across the globe aspire to.

There is this weird thing in New York City where New Yorkers beam with pride as they tell you they’ve “never even thought about going to the Statue of Liberty or to the top of the Empire State building.” Texans going to Franklin is the opposite of that.

Your line experience can be fairly different depending on what time you get there. The first thirty people or so in line will be able to spend the entirety of the wait under the roof and awning. So if the shade is important to you, I would go around 8:00 a.m. on the weekday and 7:00 a.m. on the weekend. Early birds also get to eat earlier, so… ya know. If you don’t get there early enough, you will be waiting in the sun at least until 11:00 when the line starts moving. So bring sunscreen, or a parasol if you’re driving in from the 1800’s.

I’m not sure, but I think you probably shouldn’t bother coming if you’re going to get there around 10:00 a.m., especially on the weekend. They do run out and you probably won’t know if you will get to eat until about 2:00 p.m. 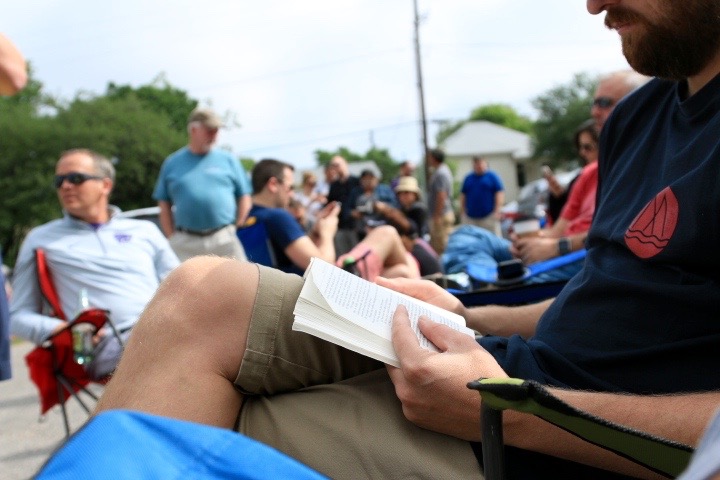 I don’t feel that I need to explain this one as much.

This is what I like to do: I wake up early in the morning and go straight to a gas station and get a really big coffee. It’s around 7:00 a.m. and I usually don’t wake up that early, so I need the big coffee, but I also buy some local beer and some ice for my cooler. So I drink the coffee and then immediately start in on the beer. You can bring your own beer to drink in the line, but finish it up before you go inside or pass it to your new friends behind you.

In the event that you are running late, or you just forget to bring your own, don’t worry. In the parking lot behind Franklin is a little coffee truck called Legend Coffee. They serve some pretty killer coffee, tea and lattes, some snack foods and that kind of stuff. Then, as for beer, Franklin has people patrol the line from time to time with a bucket of beers for sale for those of you who came unprepared.

I’m going to go ahead and advise against bringing snacks. You’re waiting in line for the best food on the planet and you don’t want to be full when you finally chow down.

Tip #5: Think About Your Order 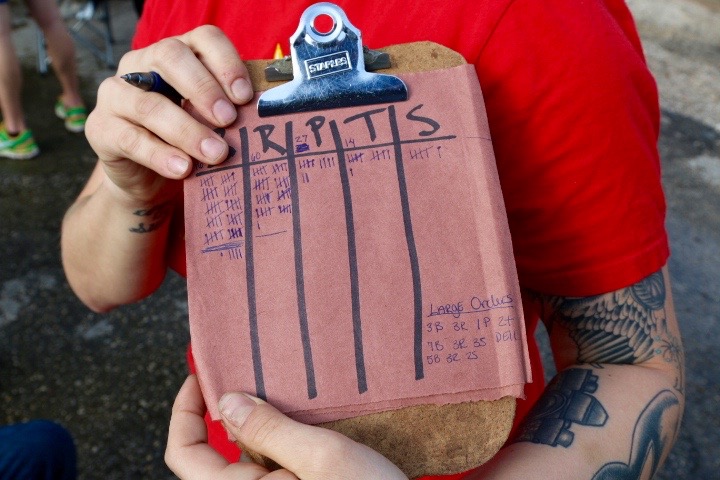 Just put a little thought into what you think you want. At some point, while waiting in line, someone will come out with a clipboard taking tentative orders. This is mainly so they can see if they will have enough food. You don’t have to commit to that order, it just helps them have an idea of when they’ll run out.

Take a look at Franklin’s menu online to get an idea of what you want. To each his own, of course, but this is what I usually order for two hungry people:
3/4 lb of moist brisket
1 lb ribs (about 4 ribs per lb)
1 sausage
1/4 lb turkey
Pearl Snap by Austin Beerworks

Don’t need to go in depth here, just telling you where the bathrooms are. There are a couple of porta-potties in the back parking lot and you can also just go inside Franklin’s. Whichever is closer, I guess.

These lines are fun. Everyone is excited about the forthcoming meal, both newbs and pros alike. A good number of the people in line have driven a good way to get there. Many from out of state and many from out of the country. Try to keep in mind that if you’re a Texan you are always representing our State, but especially when you are waiting in line for barbecue, so please act accordingly. On the other hand, if you’re from out of state, we might possibly judge everyone from your part of the world for the rest of history based on how you act in this barbecue line, so again, act accordingly.

Keep in mind that the people on either side of you are your buddies for the next four hours or so. Take the opportunity to get to know them. In our most recent trip to Franklin’s, we met Chris and Charlotte who were in from New Zealand. We spent four hours talking with them about our respective travels and then shared an extraordinary meal with them. It’s hard not to feel like you’ve just made some real friends after a shared experience like that.

Moist brisket is another word for fatty. You can order lean cuts if you really want to but don’t. This is not the time to count calories. 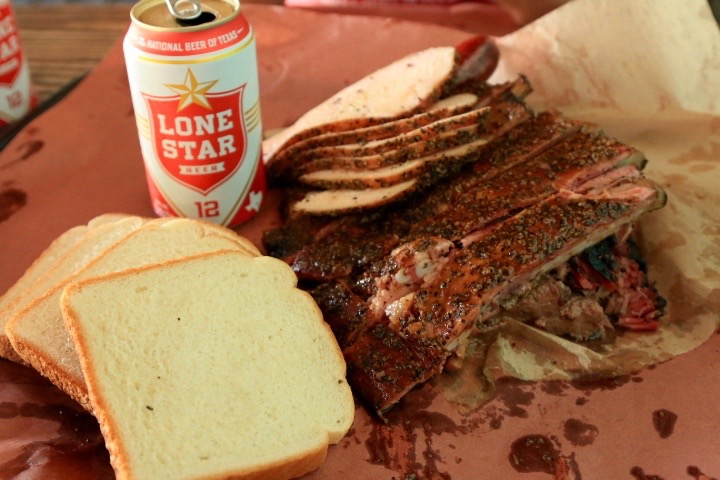 This barbecue is photogenic as hell. It is hot and shiny and you want to rub the brisket all over your body. So right when you sit at the table, take a couple of pictures of your pile of meat so you can show your lazy, jealous, dead-beat friends what they missed. This next part is very important. Immediately after snapping some food porn shots, turn your phone off and put it away. First, you should eat this with your hands and if you text or play with your phone, it will get covered in the most glorious rendered fat that has ever been and don’t nobody wanna watch you lick it off your phone.

Also, eating great barbecue is a pastoral act that should be carried out with reverence. Your phone is not pastoral and destroys reverence. Just my opinion. 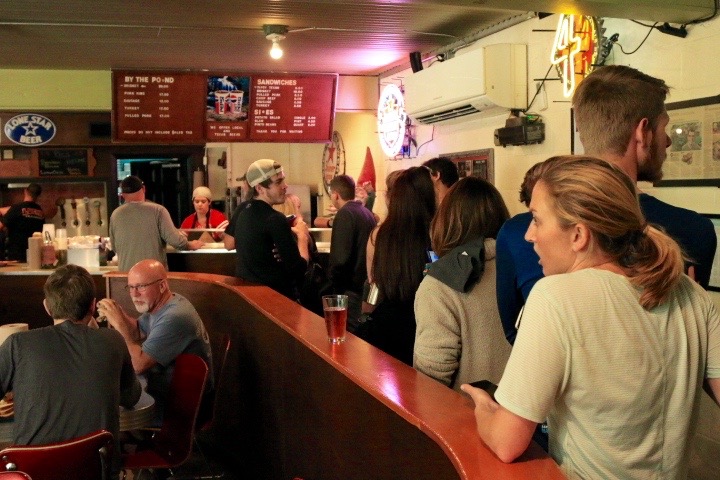 Can you take it to go? Sure. Should you? Hell no. First of all, if you were in a big hurry to get somewhere, you wouldn’t have just waited for four hours for brisket. You’ve made this pilgrimage, put in your hours, you need to finish the experience properly. Second of all, this meat needs to be eaten hot and right now. I’m not gonna get into science, but if you wait to eat and let it cool down… just don’t, OK?

This one is not really a tip, but, you know, it’s really good. And you don’t get to eat food like this often. Enjoy this day and the meat-sweats and the post-feeding nap and the satisfaction that you earned by waiting in the line.