Somewhere between San Antonio and nowhere lies the small town of Gonzales, Texas. Chances are you won’t pass through on your way to somewhere else (unless, of course, you read our post about visiting Shiner, TX.) But if you happen to be driving down TX Highway 183, don’t look down to change the radio or you’ll miss it. Therefore, if you’re a proud Texan, you should seek it out.

In case you slept through 7th grade Texas history, Gonzales, often referred to as the “Lexington of Texas,” is the location of the first battle of the Texas Revolution against the Mexican Army in 1835. Even if you aren’t up to date on your Texas history, you’ll surely recognize the famous “Come And Take It” flag that bears the symbol of the Lone Star and the famous Gonzales Cannon.

The story goes that the Mexican military gave the settlers a small cannon to defend themselves against raids and attacks by the Comanche Indians. When the political situation with Mexico deteriorated and unrest spread among Texas settlements, the Mexican Army sent soldiers to retrieve the cannon in fear that the Texans might use it against them if it came to fighting. The settlers removed ferryboats and bridges to keep the Mexicans on the other side of the Colorado River until they could amass enough Texans to defend the town. They were determined not to give up the cannon. The Texans buried the cannon to ensure it would not fall into Mexican hands and hoisted a flag with a symbol of the cannon and the words “COME AND TAKE IT.” The battle that ensued was the first of the Texas Revolutionary War.

Driving down St. Lawrence Street in Gonzales we spotted a limestone building in a field. It wasn’t a particularly large building, but a pretty one. The sign outside said, “Gonzales Memorial Museum.” The building is split into two rooms, each about the size of a living room. Along the walls of both rooms are glass viewing cases full of arrowheads, old guns, letters from the 1800’s, and pieces of currency issued by the Republic of Texas. 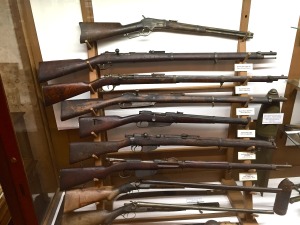 Topping this display of historical rifles ins “The Gun That Won the West”, the Winchester 1873 repeating rifle.

We went into the East room first, and looked around at all the various artifacts, which were interesting enough, but not spectacular. Then we checked out the replica of the Gonzales cannon that was made in 1936 for the Texas Centennial celebration in Gonzales. As we walked across to the other room, I mentioned how cool it would be to see the real one and wondered where it was.

It was in the other room.

Apparently later in 1936, after the replica cannon was made for the Centennial celebration, there was a large flood in Gonzales. The floodwaters washed away dirt and topsoil to uncover the original cannon, which had been buried 100 years before.

So, there it sits in the middle of the Gonzales Memorial Museum, free for any Texan to view as they please, with no glass cases or velvet ropes. So next time you are near Gonzales, walk up and put your hands right on this legendary symbol of the Texas Independence. Sam Houston, William B. Travis, and Andrew Ponton (go ahead, look him up) would all be proud.