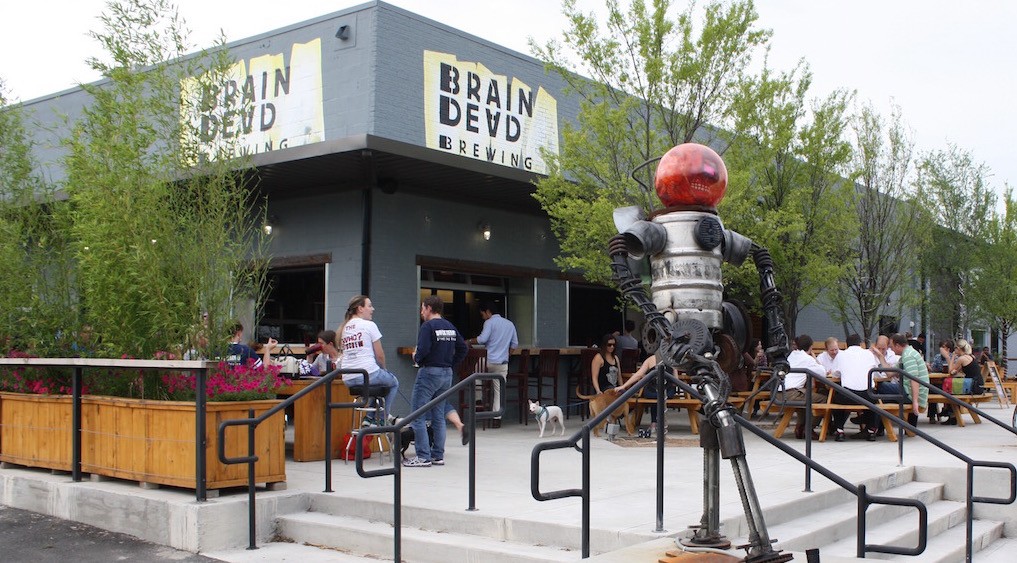 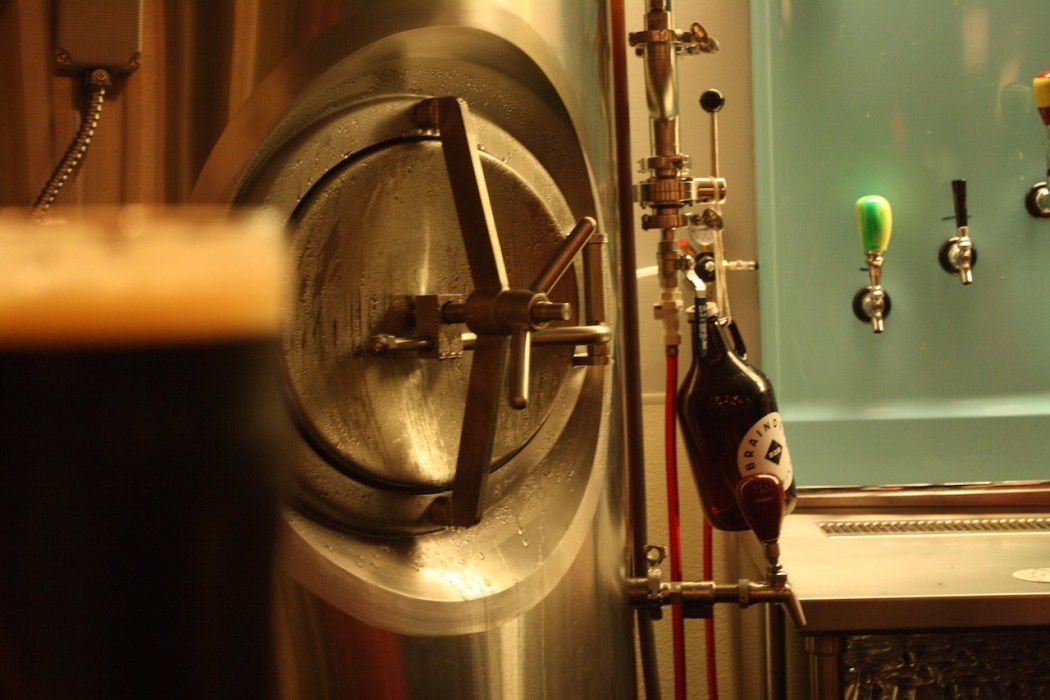 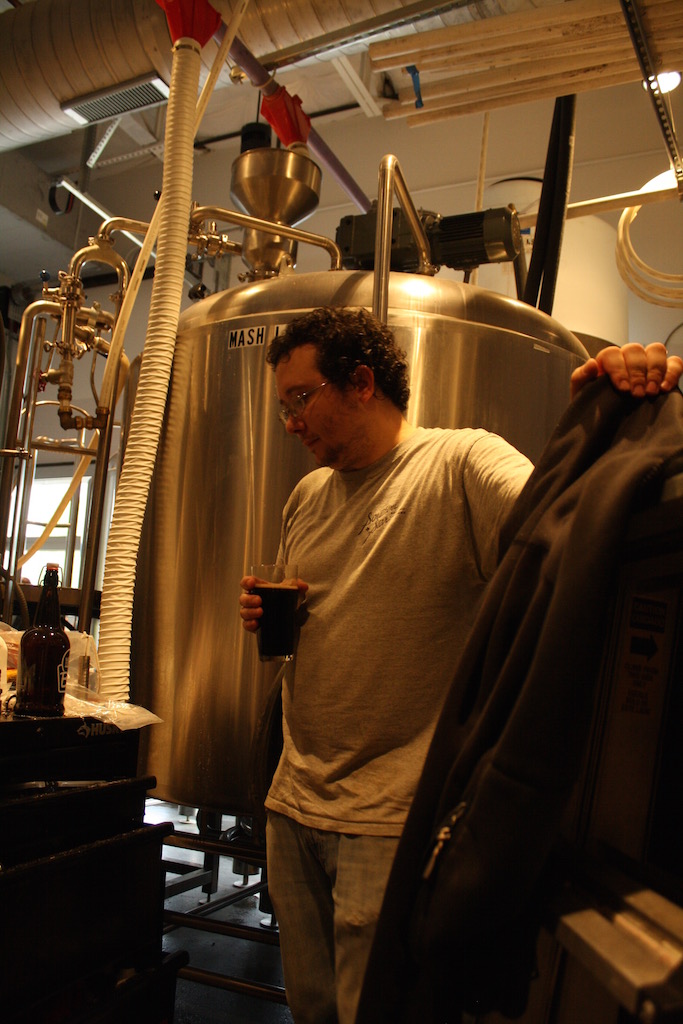 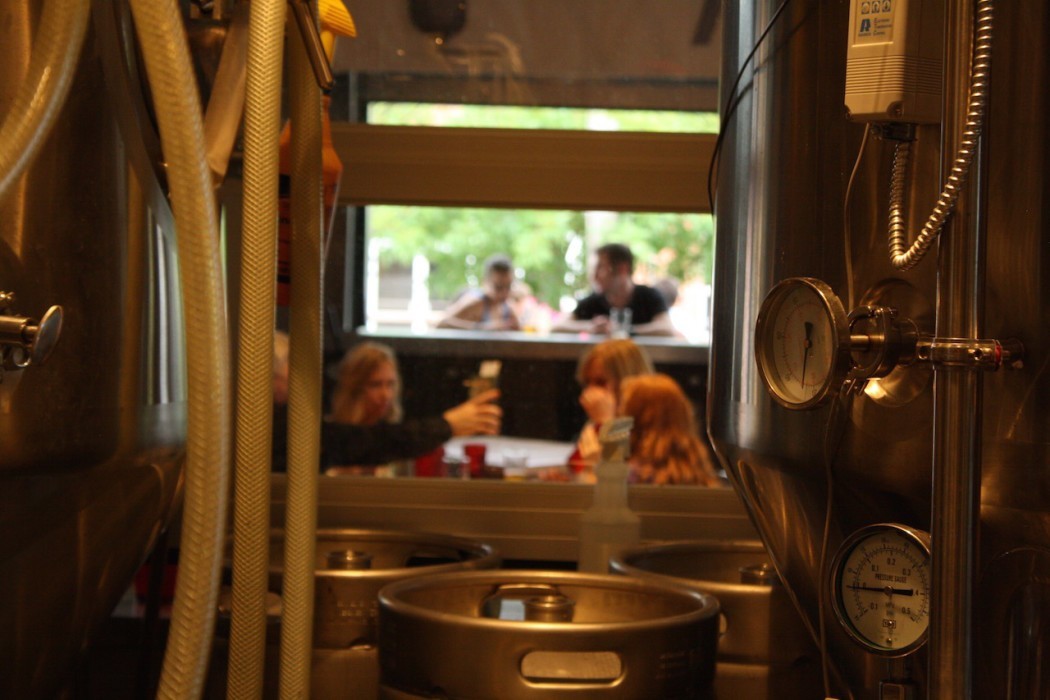 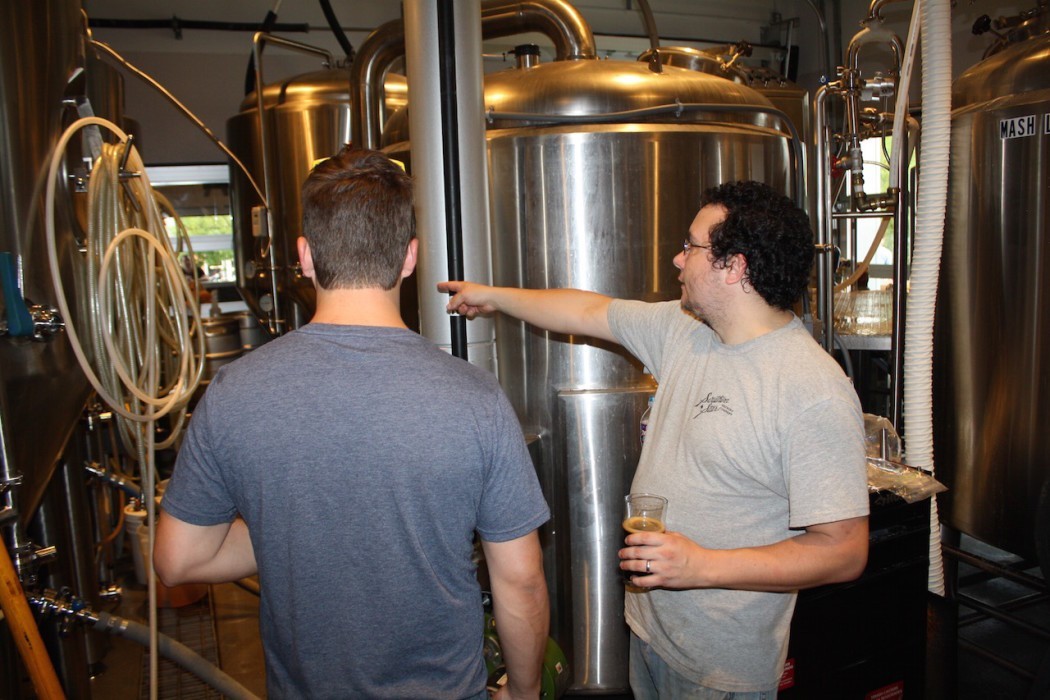 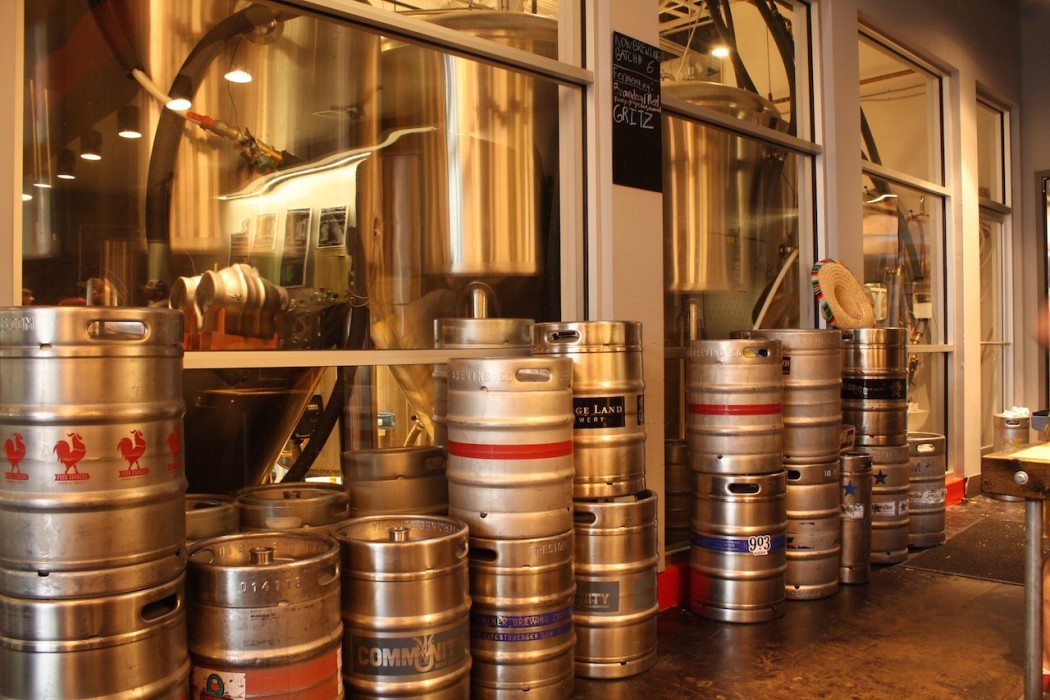 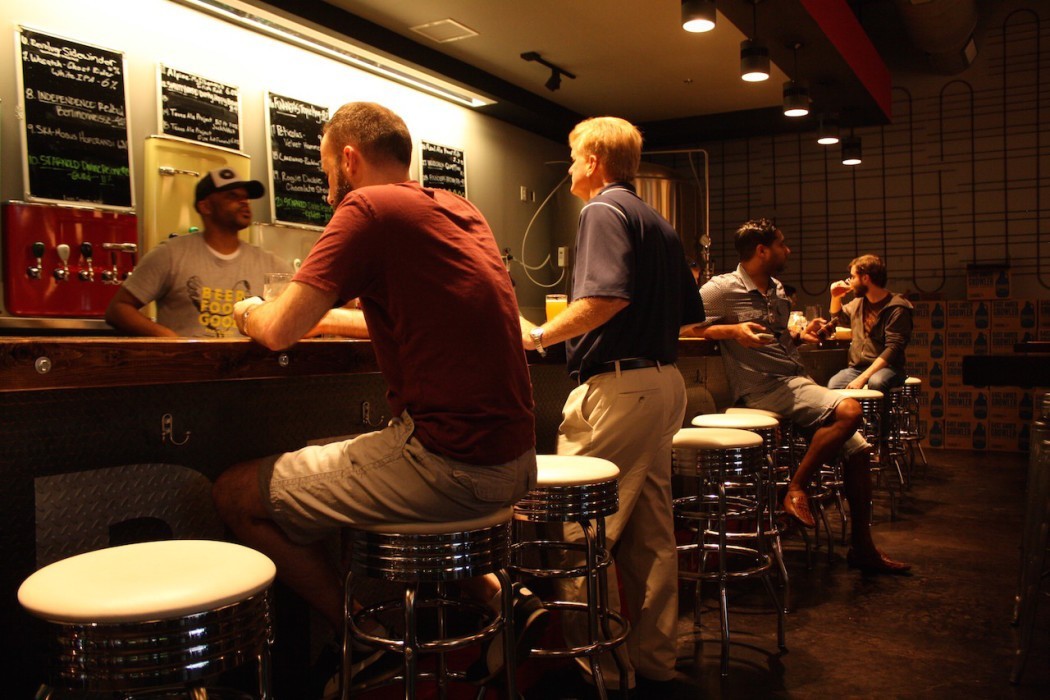 BrainDead Brewing first introduced itself to Deep Ellum in Dallas only a few months ago. Word of the food spread quickly. The turkey leg is unbelievable and I would happily pay the same price for just the cornbread it comes with. The Coma burger was sexy as hell and the cookies and milk are nothing short of slutty. The innovative food, along with a hearty helping of local brews on tap, has been drawing crowds since BrainDead Brewing first opened its doors, but all the while, in between mouthfuls of brisket chili, beer geeks look longingly at the shiny bright tanks in the corner wondering, “How much longer?”  Well, good news! The wait is over.  That’s right, BrainDead Brewing’s taps are finally flowing with BrainDead beers.

We met up at the bar with Brewmaster, Drew Huerter, for a talk and tour. The brewery is packed tightly into the back left corner of the restaurant while the rest of the space is covered in eye-popping artwork and wooden picnic tables, as is the massive patio that sits along Main Street in the heart of Deep Ellum.

BrainDead Brewing was opened as Deep Ellum’s first true brewpub. Many think of a “brew pub” as a restaurant that serves beer. An actual brewpub is a restaurant that brews and serves its own beer on-premises,which is surprisingly harder to find. Drew’s brews combined with Chef David Peña’s menu makes for a dining experience that is both super Deep Ellum and super Texan.

Drew was formerly the Brewmaster at Deep Ellum Brewing Co. before teaming up with Dallas restaurateurs Sam Wynne (Rodeo Goat) and Jeff Fryman (The Common Table) to open up BrainDead.

Because it’s improper to start a brewery tour without a beer in hand, I ordered an Export Stout, one of BrainDead’s own. Behind the bar is David, the assistant brewer, who taps a beautifully dark stout straight from a giant steel bright tank. Nice! The Export Stout is dark in color with a light mouthfeel and far less heavy than you’d expect.

“We’re trying to go with the traditional brewpub thing,” Drew explains. “I’m having a wheat beer, a white beer or a lighter beer, some kind of pale ale or IPA and then something dark and no one was really doing a spot-on, style-wise, export stout around here. So, that’s where the Export Stout comes from.”

We made our way into the brewery. Almost there, but Drew made a pit stop to put away a new shipment of Northdown Hops from the UK that had just arrived. Hops away, we moved into the brewery. Hoses, buckets, and puddles of water still remain on the floor from a full day of brewing. “Sorry, watch your step. It’s tight in here but very efficient.” Drew mentioned as he explained the brewery layout, which he designed himself.

Drew went on to add that BrainDead will offer a few core beers with some seasonals and one-offs thrown into the mix. The core beers will feature BrainDead Red, an India red ale; GRITZ, a pre-prohibition-style cream ale; Export Stout, which I was downing during our tour, and a Dry Hopped Wheat. 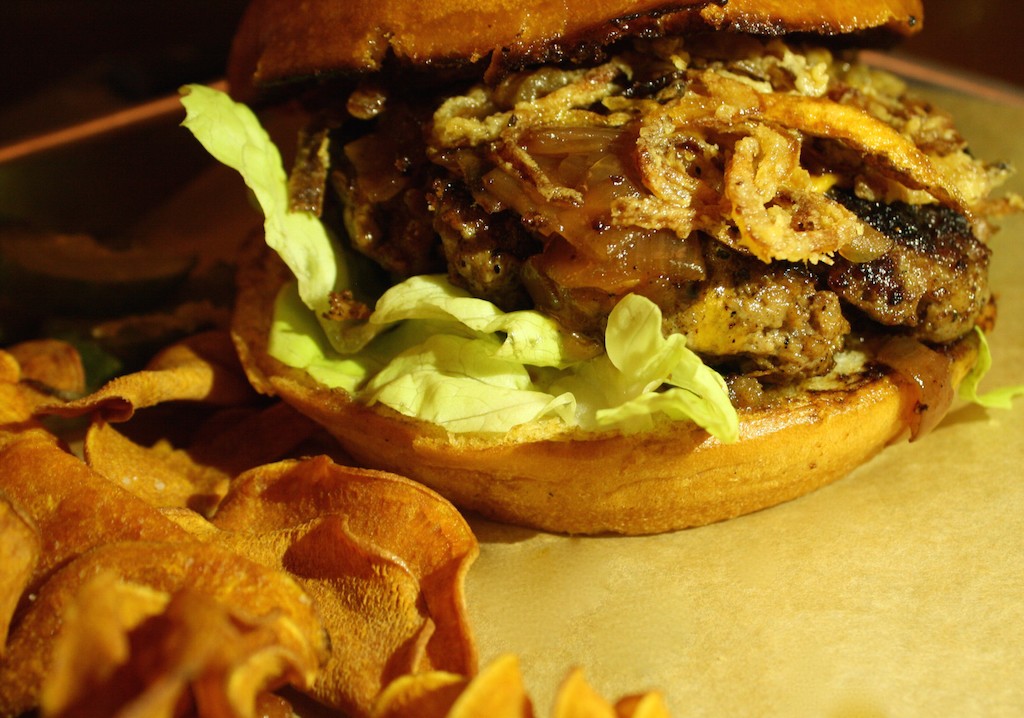 Already a few beers in, we finally sat down for some food. We started off with chips and queso, a classic Texas appetizer. The queso comes out in a cast iron skillet surrounded by lard-fried chips made in-house. The queso was great but the chips could stand on their own. For entrees, both Ben and I dove in head first. The Coma Burger came to me big and hot served with crispy sweet potato chips and house-made beer pickles. The patty is ground brisket and bacon, served with bacon on top, crispy shallots and smoked cheddar. Ben got the Turkey Leg which is a muthah!@#$%&* TURKEY LEG! It is served with caramelized apples and the best cornbread you’ve ever had. (And no, not “except for your Grandma’s.” ‘Cause you know what? Your grandma used a mix!)

Neither of us could finish our food.

The bill came to me in a Goosebumps book. Bam!

Definitely take a chance to enjoy a summer evening on BrainDead’s patio. Start with some queso or duck fat popcorn. They serve many different styles of beer from around the country, but drink at least one of BrainDead’s own. I tried everything they were serving that night and my favorite was the Export Stout. Also, make sure to put on your cool-guy clothes. You’re in Deep Ellum and Deep Ellum is cool.