“I love thee, I love thee with a love that shall not die. Till the sun grows cold and the stars grow old”

William Shakespeare said this in 1602 to a full plate of al pastor tacos.

I love tacos with same zeal. I believe you would be hard pressed to find a Texan who did not share this passion for the simple perfection that is meat inside a tortilla. So it’s a good thing the first annual Taco Libre festival kicks off this Saturday, June 27th in Downtown Dallas’ Main Street Garden Park.

Brought to us by the same team who put on SMOKED last fall, Taco Libre is Dallas’ newest food festival featuring tacos from some of the best taquerias in the DFW Metroplex. Taco Libre also features a packed line up of live bands, including Ozomatli, Deep Blue Something from Denton, and the band I’m interested in hearing for the first time, Piñata Protest, an accordion-fronted punk rock band from San Antonio. Amen.

You’ll be sipping tequila, munching on a taco, listening to the band, thinking, “it doesn’t get any better than this.” That’s when you’ll turn your head and see a masked luchador flying gracefully through the air to land an elbow in the throat of his opponent. That’s right, y’all. The festival will have Lucha frickin’ Libre wrestling. Una mas amen.

Despite all the awesomeness that Taco Libre has in store for us, Tacos will be the star of the show. Over 13 taquerias from across the Metroplex were hand picked by taco blogger José Ralat, of The Taco Trail.

Talking tacos, José is on a whole other level. This morning, I spoke with José about how he went about selecting the taquerias for the event.

“I don’t care about authentic or inauthentic, traditional or nontraditional. If it tastes good, who cares?” Jose laughed. “There were a lot of vendors I wanted to invite and couldn’t. Some would have to shut down their stores for the day, and that wouldn’t make sense in the case of this festival..”

When I asked José if he tried to include a good mix of “gringo” tacos and “street” tacos, or new style and old style, his answer was both surprising and refreshing. I guess I expected a food blogger with such a comprehensive knowledge on a certain genre of food would classify and compartmentalize the world of tacos to the point of being stuffy. Not the case.

“I don’t believe that there’s a clear delineation between gringo tacos and street tacos. Any taco’s a street taco if you eat it on the street.” Jose explained. “You’ll hear, ‘My grandma made it this way and that’s authentic.’ But everyone’s grandma made it differently.”

Before this conversation, I thought I knew tacos. José, however, loves all tacos equally the way a mother loves all of her children. He would find the strength to lift a car off a taco.

“It’s all authentic. I believe Good2Go Tacos are authentic. Tacos represent a time and place. We are in Dallas right now, so it’s authentic to us.”

Taco Libre will start at 2:00PM at the Main Street Garden in Downtown Dallas and go until 10:00PM. Tacos will start at $2 and go up from there. Don’t fill up at the first taqueria! If you are with a few people, José recommends the “divide and conquer” method; split up and cover more ground.

For a tickets and a full schedule of taquerias, bands and wrestling make sure to check out www.tacolibredallas.com.

So come on out, drink some tequila, eat some tacos, and make sure to come and say hi to the CSTX team.  We’ll be there.

With so many amazing tacos to choose from, pick and choose wisely, but do your best to go out of your comfort zone if you get the chance. Eat a style of taco you’ve never had before.

“What I hope people get out of this festival” Jose says, “is the desire to search out these places and try something new.” 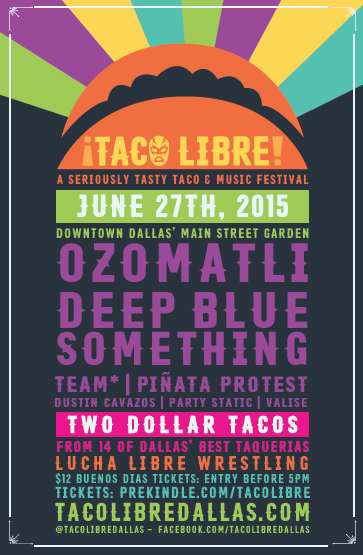