I’m an addict. I’m an addict and I don’t think I can be helped. The tacos of Super Mercado Mexico #4 have taken hold of me and I have an appetite for little else.

Lots of folks in East Dallas have had this same affliction for years. I wanted to have my 3rd birthday party at Super Mercado Mexico #4 but my mother refused. It’s not that she was some stern prairie governess; far from it. She was just wise enough to recognize the narcotic power of pork slow cooked in lard. Instead I had my birthday party at Discovery Zone like everybody else. I guess like the old outlaw country tune goes, “That leaves only me to blame, cuz mama tried.” 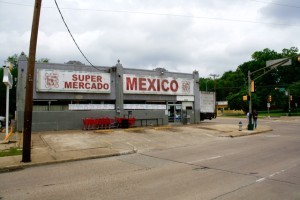 Super Mercado #4 is located on the corner of Beacon and Columbia in Old East Dallas.

East Dallas has a lot of good Texan in it, and Super Mercado Mexico #4 is a prime example. A little grocery store askew on the corner of Beacon Street and Columbia Avenue, Mercado is a neighborhood convenience for folks seeking staple Mexican groceries and, more clandestinely, a welcome way station for the pilgrims of the taco trail.

The gray brick building is emblazoned with its tenants name in the tri-color, but there are no outward signs of tacos.  If you trust in T Bone, however, a real prize can be had. When you enter the building, allay your desire to gorge on the tamales steaming to the left of the register or a dimpled, forest-green avocado, bigger than a pear, to the right. Grab a Mexican coke and focus. Order three tacos, grab your receipt and rush to the back of the store. There will be time for votive candles and pan dulce later. (Seriously, don’t skimp on the votive candles, your soul depends on it.)

How To Super Mercado

The taco stand is in the back, left corner of the market. I imagine it began as a street stall and the sheer gravitation of its meaty rewards sucked a butcher, a produce isle and a tortilla machine into its orbit. Sidle up next the obreros, nurses, students and abuelitos, make your selections from the white board to your left and wait for one of the butchers-cum-taqueros to mosey over. 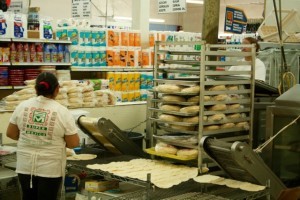 The tortilla factory in the middle of the store is cranking out thousands of fresh flour tortillas every day.

The menu has a handful of selections but I tend to stick to the fajita and the carnitas. The freshly made flour tortillas only have to travel a dozen feet to your plate; choose them over corn this time. After placing your order you can get a solid drool going by ogling the crispy mountain range of chicharrones in a display case to the right of the counter or get hypnotized by the whir of the tortilla machine and the deft skill of the women on its miniature assembly line. If you’re lucky, you can spy one of the elephantine chunks of lard that fuel the carnitas and watch as the butcher fishes out a chunk of pork butt from a bubbling vat to inspect its progress.

The carnitas are divine- tender with a light exterior crisp, and a simple flavor waiting to be perfectly paired with the mild green sauce provided. The fajita meat is a sumptuous red and chopped in big chunks that fill your fresh tortilla to the brim. The few seconds the freshly made tortillas spend on the griddle give them a delightful crunch, but buy a pack of tortillas to go and enjoy the buttery treats all day.

As is often said of the great barbecue joints across Texas, Super Mercado can be judged by its variety of patrons. All manner of East Dallasites find their way to the countertop to enjoy their fare, giant by street taco standards. This crossroads perfectly represents one of the coolest things in Texas- the melding of cultures present on hundreds of street corners and across thousands of towns and cities in our great State. It also suggests one of the beautiful aspects of taco hunting- you can find juicy, meaty greatness in unexpected places. Fortunately (or unfortunately) Super Mercado Mexico #4 doesn’t seem to appear in too many taco guides, so do yourself a favor and be the pioneer of your taco tribe. Three tacos, carnitas and fajita, para aqui (freshness is always important), con todo, and dig in.