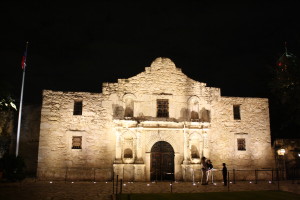 Do you remember the Alamo? Seriously. When was the last time you were there? I feel most of us Texans have been at some point in our lives. Maybe you visited and did the tour on a class trip when you were in elementary school. I went for the first time when I was about six years old with my Granddad on what I thought was a trip to Sea World. We went to the Alamo and I remember him telling me something about why it was important, but I forgot exactly what he said. We probably took the tour… but I don’t really remember.

I’ve always known that if you’re a Texan, you have to visit the Alamo. I went when I was six so I could say I’d been and not have to worry about it again. To be honest, I hadn’t quite followed the battle cry. I had forgotten the Alamo. 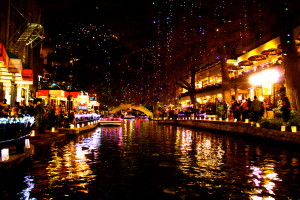 We took the scenic route to the Alamo along the River Walk.

My most recent visit to San Antonio reminded me why the Texan soldiers, while charging Santa Anna’s army at San Jacinto, gave the order to the Mexican Army, their fellow Texans, and every Texan for the rest of time: Remember the Alamo.

Our trip to San Antonio was not meant for the Alamo. We were on our way from Southeast Texas to Austin to meet some friends at ABGB for a drink, but decided to stop off in San Antonio to visit the Esquire Tavern, which boasts the longest bar in Texas. We took a stroll along the River Walk and decided to head over to the Alamo on our way back to the car.

I think every Texan smiles when they turn the corner off of Crocket Street onto Alamo Plaza and see what is, to a Texan, arguably the most famous building in the whole wide world. I did. As I crossed the street and walked toward the Alamo, always a little smaller than I picture it, my smile faded a little as, indeed, I remembered.

You see, I’ve been a history buff since 7th grade when my Texas history teacher, Mr. Barnett, so colorfully told me about the Texas Revolution and the men who fought the battles. Once you’ve read up on the Battle of the Alamo and understand what happened, it’s difficult to see the Alamo as a tourist attraction. Instead it takes on a more solemn, sacred character that is normally associated with a monument of a more recent war. 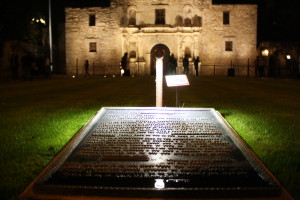 In front of the Alamo is a brilliantly green patch of grass on which sits a plaque with the words of the letter written by Lieutenant Colonel of the Texas Army, William B. Travis from within the Alamo.

I am afraid that a few people reading this may not have read William B. Travis’s letter, and I’d like to remedy this right now. Please take a second to read below:

To the People of Texas & All Americans in the World

I am besieged, by a thousand or more of the Mexicans under Santa Anna I have sustained a continual Bombardment & cannonade for 24 hours & have not lost a man The enemy has demanded a surrender at discretion, otherwise, the garrison are to be put to the sword, if the fort is taken I have answered the demand with a cannon shot, & our flag still waves proudly from the walls I shall never surrender or retreat. Then, I call on you in the name of Liberty, of patriotism & everything dear to the American character, to come to our aid, with all dispatch The enemy is receiving reinforcements daily & will no doubt increase to three or four thousand in four or five days. If this call is neglected, I am determined to sustain myself as long as possible & die like a soldier who never forgets what is due to his own honor & that of his country VICTORY OR DEATH.

P.S. The Lord is on our side. When the enemy appeared in sight we had not three bushels of corn. We have since found in deserted houses 80 or 90 bushels and got into the walls 20 or 30 head of Beeves. Travis”

Just saying, I teared up while reading this in front of the Alamo. And if you have an ounce of Texas pride you should too, damnit.

William B. Travis died in the Battle of the Alamo a few days after writing that letter. He was 26 years old.

Every once in a while I like to read these words to remind myself that, no matter how rough I think things are, they’re still not that bad. This letter also helps keep my resolve to finish things that I start.

Walking past the grass towards the front of the Alamo, directly in front of the doors is a brass line about five feet long. You’ve heard the phrase “a line in the sand.” That phrase comes from the Alamo. And this was the line.

William B. Travis, before the assault, knew what the outcome of the battle would be if no reinforcements arrived. Legend states that he gathered his men together before the final assault and told them, “We must die. Our business is not to make a fruitless effort to save our lives, but to choose the manner of our death.” He then drew his sword and drew a line in the dirt on the ground. “I now want every man who is determined to stay here and die with me to come across this line.”

All but one man crossed the line, (look up Louis “Moses” Rose a.k.a. The Coward of the Alamo, a.k.a. the Chicken of the Seige) including Jim Bowie who was wounded but asked to be carried across the line on a stretcher.   All who crossed the line fought and died in the battle of the Alamo.

A little over a month after the fall of the Alamo, about 900 outnumbered Texan soldiers led by General Sam Houston were charging Santa Anna’s army at San Jacinto. The Texan Soldiers as they ran towards the Mexican army shouted the famous battle cry, “Remember the Alamo!” 630 Mexicans were killed. 208 were wounded. 730 were captured. 9 Texans were killed. Don’t mess with Texas.

Since my visit to the Alamo, I have started to consciously think about the events that unfolded there. I have read and reread William B. Travis’s letter more often. I truly believe that if we could all, as Texans, keep these heroes and their sacrifices a little closer to the front of our minds, we could be better people.

I may have started to sound like a zealot. I don’t apologize. I know that I can always use a little push to keep on going and finishing the tasks that I start. (I honestly have about fifteen unfinished CSTX articles in my documents folder.) Remembering these stories of Davy Crockett, Jim Bowie, and William B. Travis gives me the push I might need to do what I need to do.

I believe the famous words shouted at San Jacinto were not just a battle cry. We need to be reminded of both the brutality and nobility that men are capable of. We should never forget this place or those young men and the legacy of pride they instilled in those who won the battle of overwhelming odds only a few weeks after their deaths to secure the future of their home which, as we all know, was, and is, a very bright one.

It’s been a long time since that field trip in elementary school. So don’t wait as long as I did. Take a drive to San Antonio. Re-read Travis’ letter every once in a while, and, as often as you can, please…