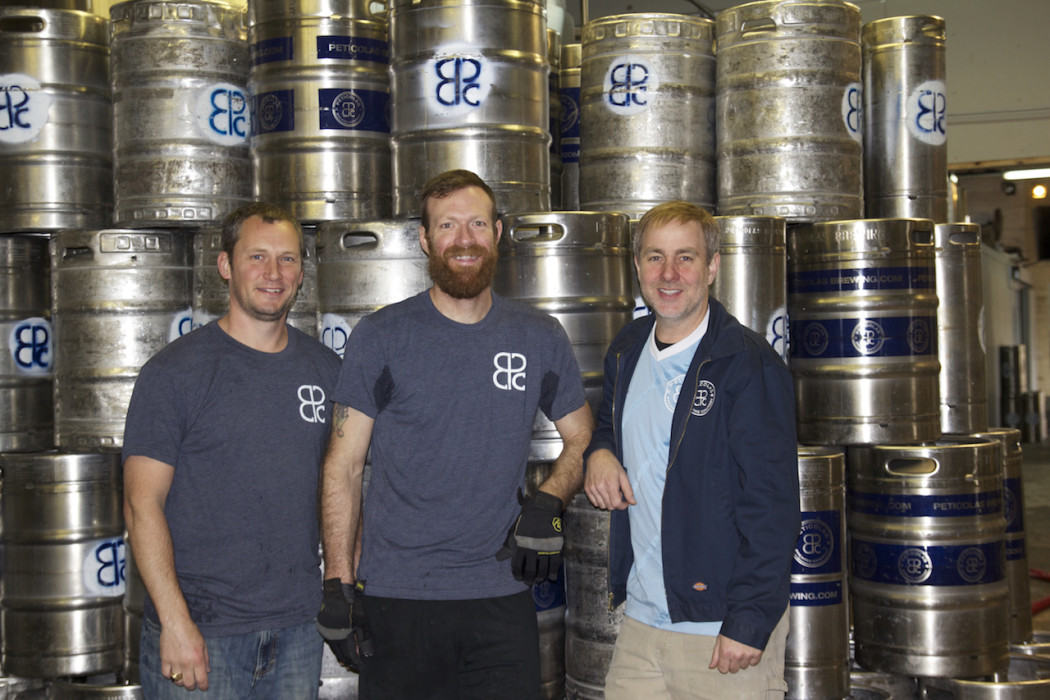 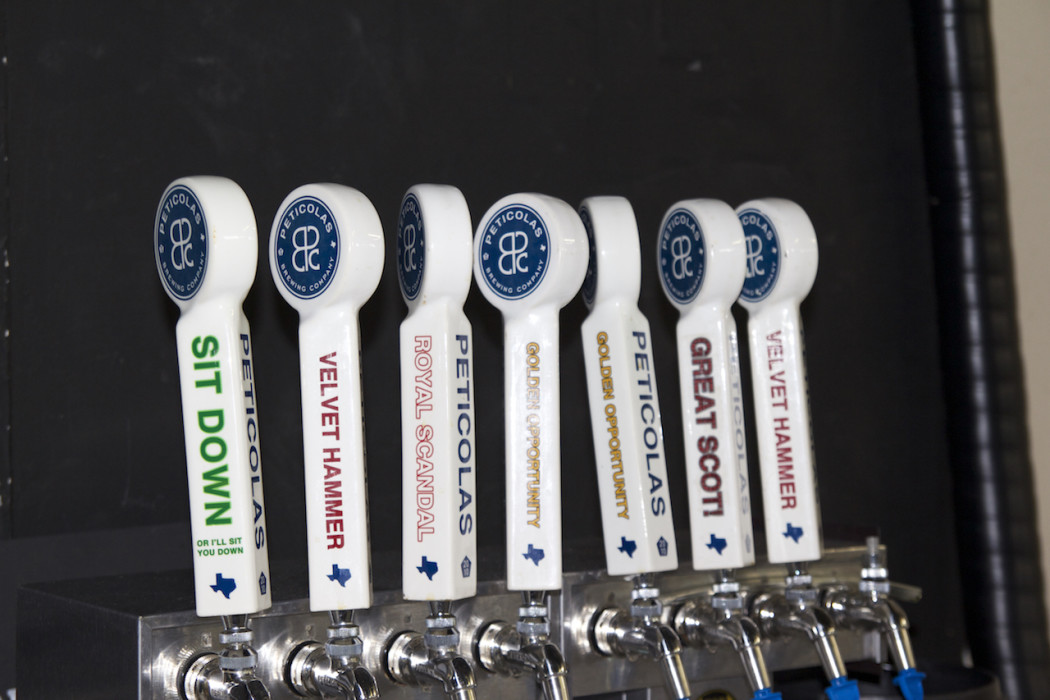 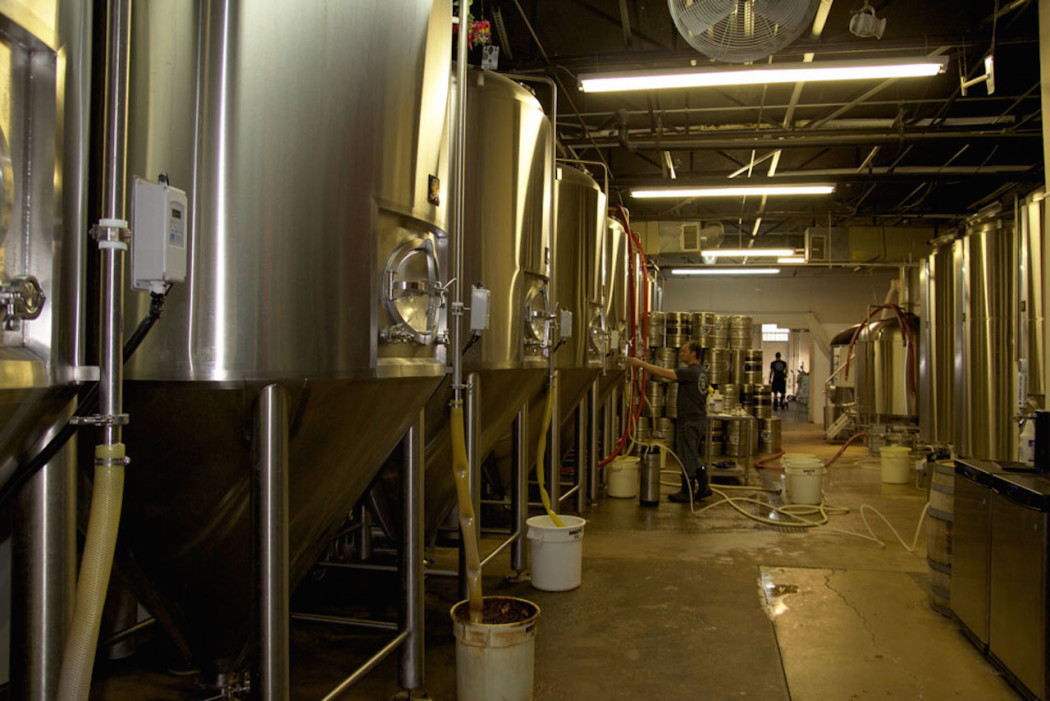 Brewers doing what brewers do in the brewhouse. 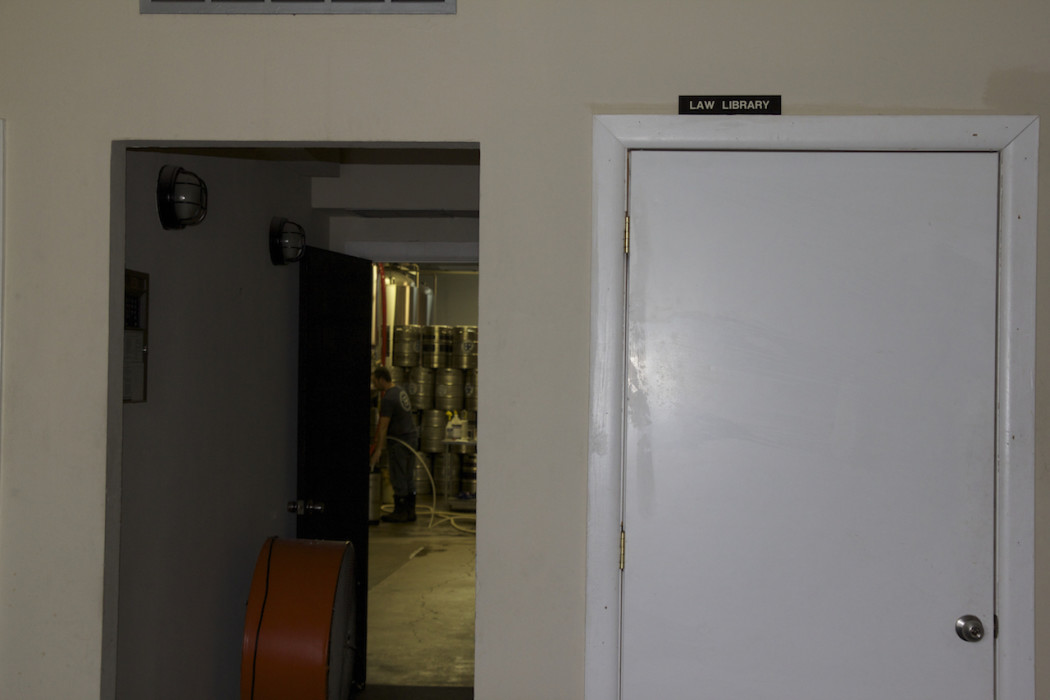 How many breweries do you know of that have their own law library? 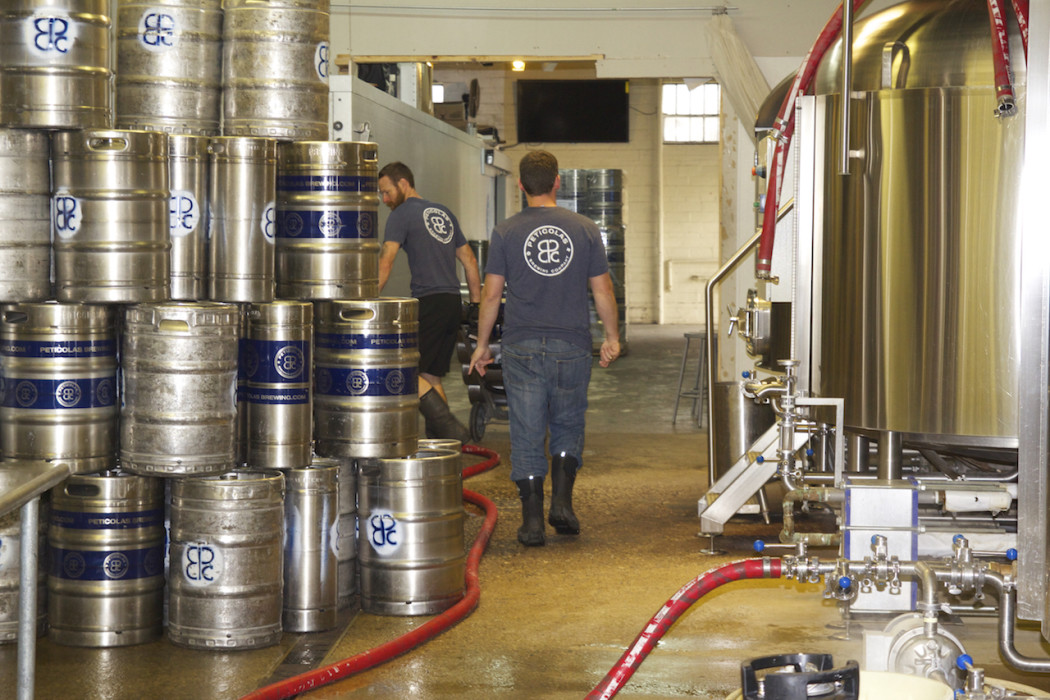 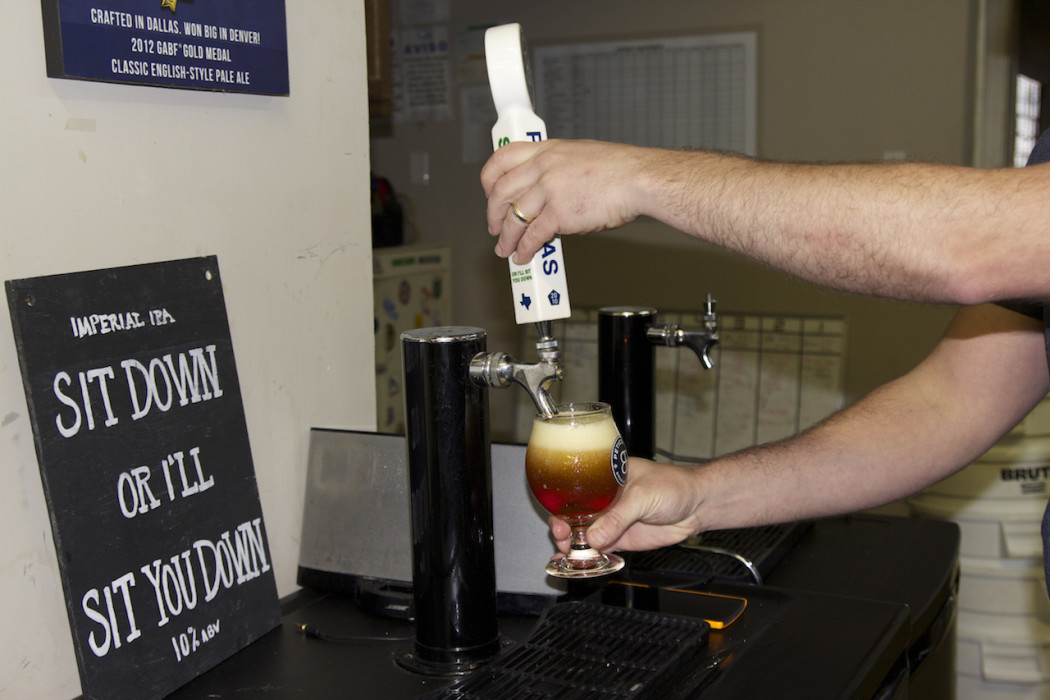 A Sit Down Or I'll Sit You Down Imperial IPA being tapped in the brewhouse. 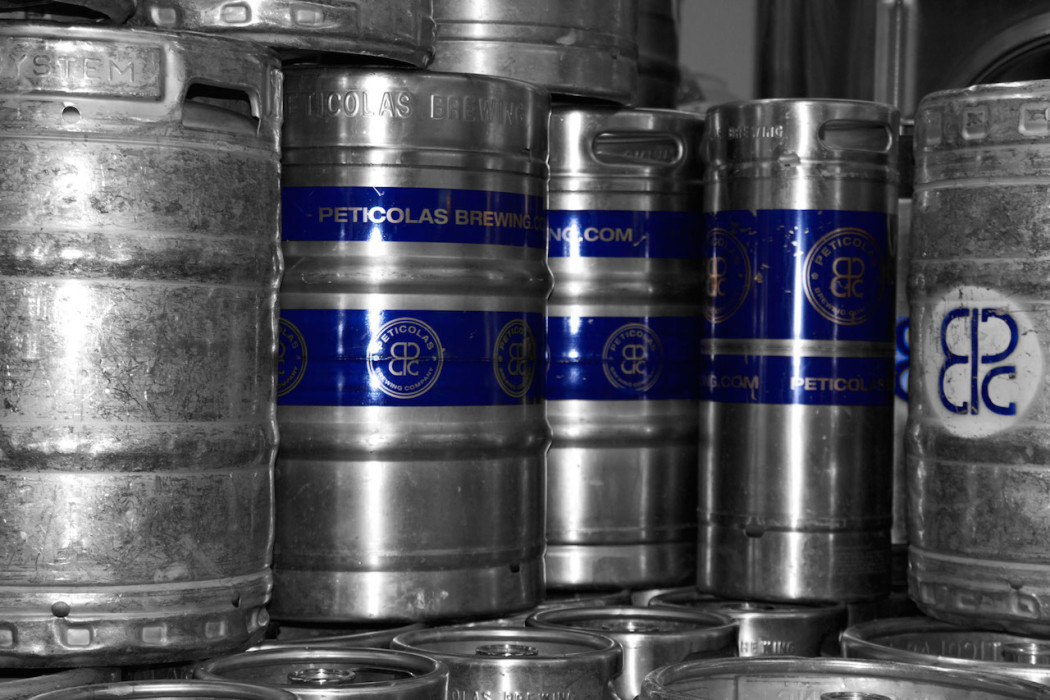 Kegs washed and waiting to be filled. 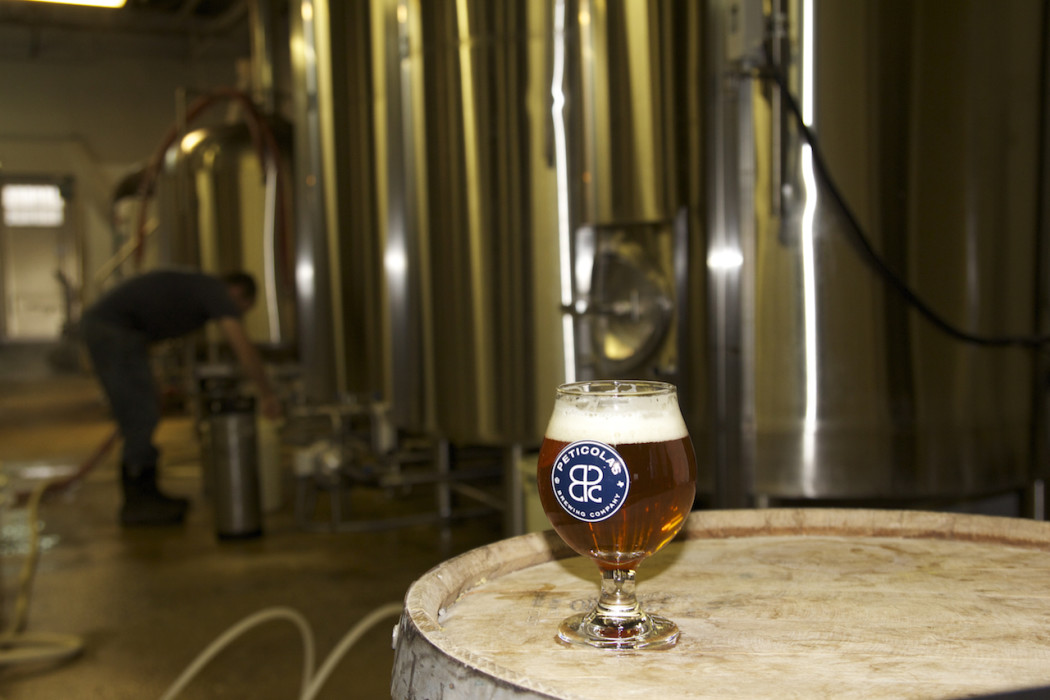 The Man with the Velvet Hammer: Michael Peticolas

I’m sure that if I were a journalist, on my first day of journalism class at Journalism University they would have taught me not to start an interview with the words, “What’s new?” But of course, those were the first words out of my mouth when I sat down with owner and founder of Peticolas Brewing Company, Michael Peticolas to talk about his brewery and the distribution rights lawsuit that he and some other Texas brewers recently filed against the State of Texas . As he laughed and then politely started to humor me, I realized what an annoying question that must be. Because the true answer to that question, for Peticolas, is…  Everything.

Anything related to craft beer in Texas is new. Peticolas, in particular, could be considered one of the older brothers in the North Texas craft beer family and it just celebrated its 3rd birthday. The beers that are coming out of all of these breweries are so good that we, as craft beer consumers, immediately take to them as our beers of choice. This kind of makes it seem like they have always been our favorites. But the Velvet Hammers and Royal Scandals that now seem like old friends are, in reality, very recent acquaintances.

So I started with the fumble, “What’s new?”

“I always laugh at that question, ‘What’s new?’” Michael says. “Well, I just sued the State of Texas two months ago. I rolled out the Sledge Hammer a month and a half ago, but to the craft beer consumer that’s not new anymore.”

“I’ll never forget when I delivered Wintervention for the first time. It had been in the market for, like, five days and someone asked me, “What’s new?” And I’m thinking ‘What’s new?!’ This beer just came out and we’ve only been around for ten months. All my beer is new!”

I guess the appropriate question would be, “What’s new-ER?” The answer is a lot.

Michael:   I guess the newest release announcement that we have made is the collaboration we’re going to do with Green Flash, which is an IPA called Operation Collaboration. Frankly, I didn’t even want to announce that, but people go to the website and the TABC publishes the label. So, people always go and release my news now and I’m like ‘Can’t I release my own beers now?’ but since we saw they were releasing the label, we went ahead and announced it.

CSTX: With this collaboration, you already have a kick-ass IPA and Green Flash is known around the country for their IPA’s. With Operation Collaboration, what are you doing differently with this IPA to make it compete?

Michael: You’re going to have to wait. But I think you’re on to something good. Our IPA’s are pretty outstanding and they probably are known for making the best IPA’s in the country. So, I’m pretty excited about this beer and I think you will be too.

CSTX: So do you have a target date?

Michael: Well, if I gave you that information now, in a week someone else would come along and say, “What’s new?”

As if craft beer wasn’t artsy enough in its own right, Peticolas recently partnered up with the Dallas Opera for the premier of a new opera called Great Scott! Great Scott! will feature the music of American composer Jake Heggie and Tony Award-winning librettist Terrence McNally. It is scheduled to debut in October and Peticolas will pair their Great Scot! Scottish Ale with the premier.

Interesting side note: The opera, Great Scott!, is a co-production between Dallas Opera and the San Diego Opera. Green Flash Brewing Company is also located in San Diego. WHAT?!?!?!

For more information on this exciting partnership, check out The Dallas Opera.

In December, Michael Peticolas, along with Rhett Keisler of Revolver Brewing and Chip McElroy of Live Oak Brewing in Austin, sued the state of Texas in order to reclaim the rights to distribute their own beer.

The Institute of Justice, who has taken up the cause, describes the issue as such:

“Texas is simply using the public power of the legislature for the private gain of beer distributors. Amazingly, the law forces breweries to give up their distribution rights for nothing, but distributors can turn around and resell those same rights for whatever price the market will bear. This case will determine whether Texas brewers can keep these valuable property rights in the businesses they built.”

Michael, who practiced law before opening the brewery, is confident that, though it will be a lengthy process, there is light at the end of the tunnel. “I have to believe that, otherwise, I never would have filed the suit.” Michael explained, “But you know, people have to realize that things are just starting to heat up.”

So what does the relinquishing of distribution rights to the major distributors mean for those of us who love our Velvet Hammers or a Sit Down Or I’ll Sit You Down?

“Anyone in Austin or Houston, they’re not able to try my beer. I’ve been stripped of a huge value of my brand.” At this point you can hear the frustration in his voice. “If that brand had it’s value in place right now, and hopefully it will once the litigation is over, it would open up a huge new revenue stream that is nonexistent right now because of the law, and that would allow me to reinvest in my brewery.”

The reinvestment in his brand would mean the possibility of bringing his beer to more people in more places and that, as far as I’m concerned, is a worthy cause.

“The support’s been huge. From fellow brewers, to the retailers out there, to the folks like you, the consumers. A lot of you guys are very pro-business and literally just cannot understand why the small guy is being leveraged to the benefit of the big guy.”

So, Michael is confident about his and the other brewers chances in the courtroom. I am too. After all, David beat Goliath with a tiny rock.

…think what he could have done with a Sledge Hammer.

Be sure to check out the Peticolas Brewery tours every 1st and 3rd Saturday of the month from 1:00 to 3:00pm. The tour is $10 and that includes a free glass and 3 beers.

Also, check out peticolasbrewing.com for a full list of seasonal and year-round beers and where to find them.