God bless faculty meetings… I am fully aware that I probably lost a lot of readers right there, but just hang with me long enough to redeem the opening sentence.

Texans have always worn their pride on their sleeves. The t-shirts that are connected to those sleeves say a lot about what we’re proud of; our high school, our baseball team, or our favorite band. But if it weren’t for a certain faculty meeting at Liberty High School in Frisco back in 2011, those sleeves on which we wear our Texas pride would be just a bit boring.

During this fateful faculty meeting Brian Wysong, a marketing teacher, looked over the shoulder of art teacher, Jeb Matulich, and saw what he was drawing in his notebook. So the legend goes. There was a brilliant explosion of light and fire over all the teachers heads, and Tumbleweed TexStyles was born.*

*I have neither searched for nor found any evidence to suggest that this did not occur.

Tumbleweed TexStyles, purveyor of fine Texas t-shirts, started as a way to showcase Jeb’s Texas themed designs with the help of Brian’s marketing and business know-how. Four years later TWT has grown into the go-to clothing brand for Texans looking to show their pride. For real, it has. You will see TWT shirts on some seriously notable Texans. Aaron Franklin of Franklin Barbecue wore one in his profile in Parade Magazine. Josh Abbott wears TWT and told Brian that at every concert they play people in the crowd are in their shirts.

The shirts are beautifully simple. Jeb’s designs are clean and, to-the-point, giving the different items that bare them a sense of authority. They appear to state facts rather than express opinions. The waggishly proud and quirky attitude of all of Jeb’s designs make the Tumbleweed TexStyle line cohesive and uniquely Texan. 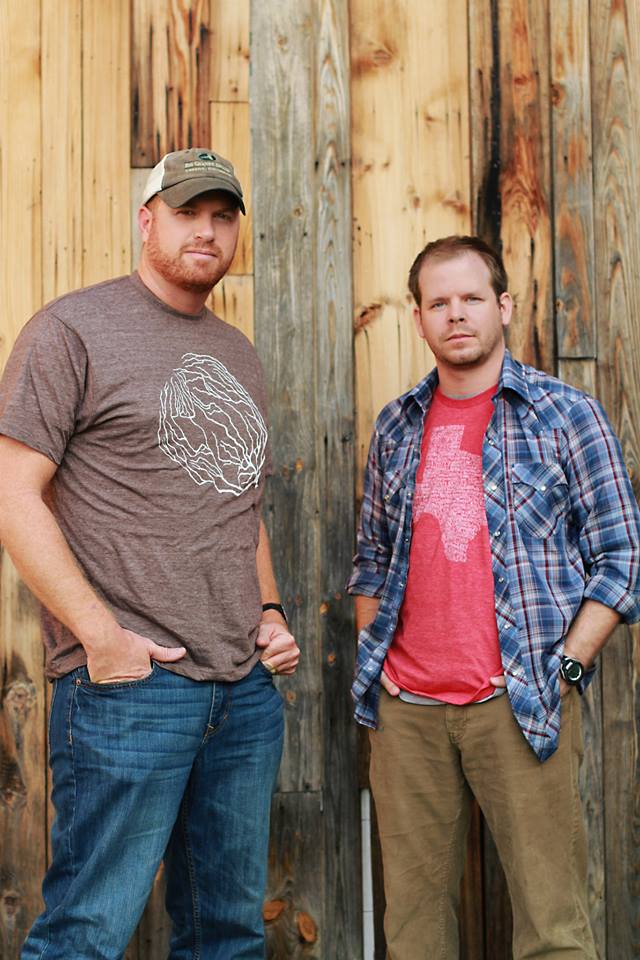 During a mandatory faculty training before the school year started in 2011, Jeb was sketching what would later become the “Secede” t-shirt in a notebook. “I was just drawing Texas with the word ‘secede’ in there,” Jeb remembers. “Brian was sitting behind me. We didn’t really even know each other at that point, but we started talking about my drawings and then took it from there.”

Brian and Jeb each put in $700 for their first order of shirts and had the “Secede” design printed in three shirt colors.
“It wasn’t meant to be political,” Brian explained. “Rick Perry said that Texas should secede from the United States. So we did it as more of a humorous thing.”

From there the next design was “Texas Towns” which has the names of 183 Texas towns handwritten in the shape of Texas. The designs kept coming and the shirts kept selling. The first screen-printing company they were using had to move to bigger buildings three times. Their new printers have had to expand their warehouse and are now looking to expand yet again.

TWT has grown from the one t-shirt on the Etsy shop to having their designs and products in more than 120 stores around the State. They’re also in stores in Arkansas and Oklahoma. In 2014, they shipped some Texan love to every other state in the U.S. and to more than 15 countries worldwide.

Texas Tees Across the Board 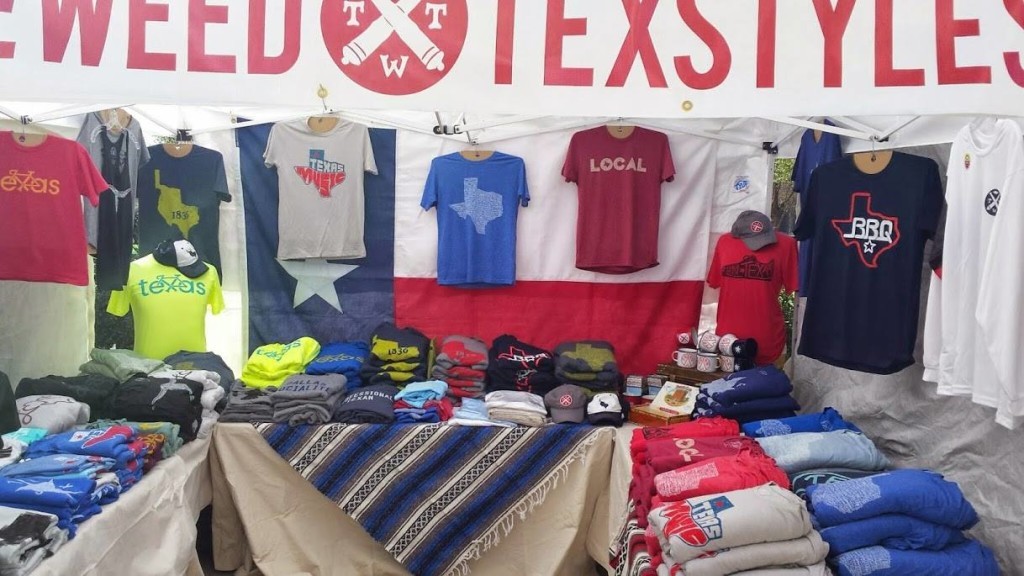 The Tumbleweed TexStyles brand is like the State of Texas itself in that there is something for everyone. The designs and logos do not discriminate.  Any of Jeb’s art would be just as appropriate on the chest of Willie D as it would on Willie Nelson.

“I draw designs that I would wear. You know, I’m Mr. Texas in my mind,” Jeb laughs. “I’m hardcore, and to have other people get that connection, I guess, it’s awesome.”

“For me, and for Jeb, too, it’s the culture aspect of Texas.” Brian said, “People make up what Texas is. When you think of music and art and education it’s really all about people. From the redneck true Texas music crowd to the Marfa hipsters to the Ft. Worth old Texas money. It hits so many people, which I think is rare.”

Rare? Maybe. Surprising? Not really. Especially as it seems that Texas pride, though always present, is experiencing a crescendo lately. Perhaps Texan Millennials are trying to grasp at one of their only defining traits in order to fill a void in their ambiguous generational identity. 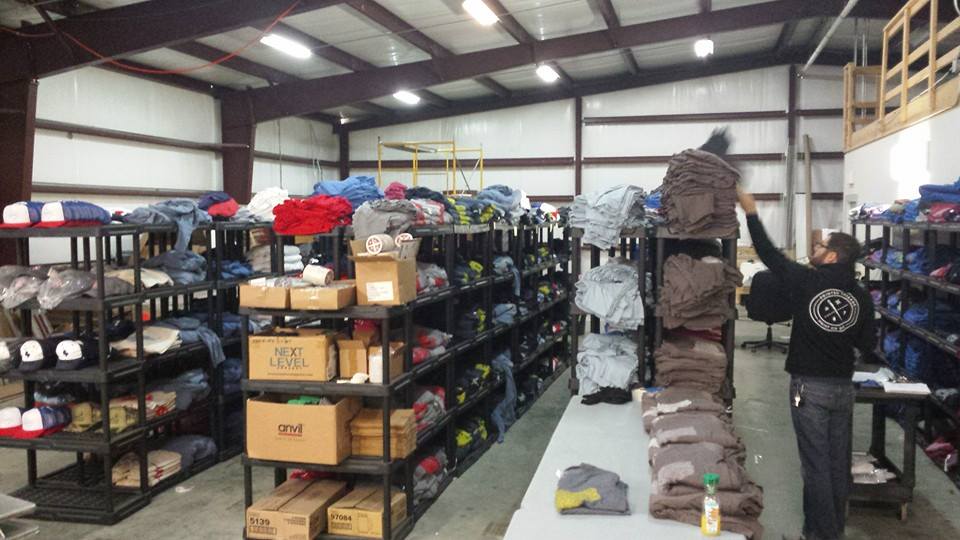 With Tumbleweed TexStyles growing at the rate that it is, producing the unofficial t-shirt of Texas pride is more than a full-time job. Here’s the thing though; Brian and Jeb are full-time teachers. 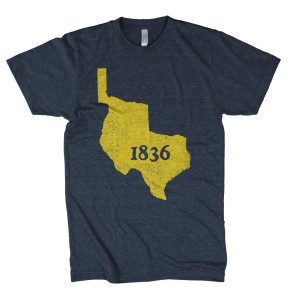 The Republic of Texas t-shirt features the shape of Texas in 1836.

Almost everything that TWT puts out is linked to education in one way or another. At one point Jeb taught Texas history and it comes through in some of his designs. For example, the Republic of Texas t-shirt features the shape of Texas as it looked in 1836 after the Texas Revolution (this is my favorite one). Brian and Jeb both met and started the company while teaching at Liberty High School. The rest of the faculty, as well as the students at Liberty, have embraced and help grow TWT as a brand.

“Our administration’s been real supportive, too,” Jeb said. “Our principal found out and he jumped on the wagon. On Friday we could always wear jeans and you had to wear a Liberty shirt. Then the principal changed it to where it had to be either a Liberty shirt or a Tumbleweed shirt.”

TWT has its origins in the school system, but more importantly, its future is closely tied with the future of the students themselves. Brian and Jeb’s priority, above selling t-shirts, is giving back to their local community and supporting the students they teach. It’s in this spirit that TWT gives 10% of its profits to the Frisco Education Foundation. This donation goes toward helping teachers in the Frisco ISD classrooms and goes toward a yearly scholarship for two students: one student pursuing arts and graphic design, and one pursuing a business and marketing degree.

The designs and products that TWT puts out epitomize what we consider to be the Coolest Stuff in Texas. I’ve been wearing their t-shirts since they were only available through their Etsy shop and I will continue to wear their stuff as long as they’re making it.

But there are lots of clever t-shirts out there. What makes a TWT shirt special is the passion of the dudes who make them. The meticulously crafted “Texas Towns” shirt could not have been created by someone who didn’t understand how substantial and unique every single Texas town is, regardless of size or population. Only someone who truly knew the power of Texas pride would realize how badly people want to wear the State of Texas on their chest.

Instead I will just say cheers to some of the Coolest Texans we know: Jeb, Brian, and every other teacher in Texas.

Be sure to check out everything Tumbleweed TexStyles has to offer by visiting their online shop.