Just off I-45 in Huntsville, Texas, about a mile down Montgomery Road, you’ll find the New Zion Missionary Baptist Church. It’s a small red brick building on the right side of the road with a short white steeple on the roof. Off to the left of the church is a building that could be mistaken for the tool shed, paint chipping and all but lost into the grey background of this rainy, winter day, yet it is anything but discreet. You are in no danger of driving past it, simply because this is exactly what you’ve been looking for ever since you exited the highway and smelled the smoke. 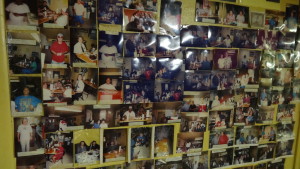 The small building that houses the New Zion Missionary Baptist Church Barbecue is, and I hope they’ll forgive me for saying so, disheveled and unkempt, and absolutely everything you want in a barbecue joint. Inside, the walls are lined with newspaper clippings and pictures of regulars. They serve brisket, ribs, sausage, chicken and all the sides you’d expect from a classic Texas barbecue joint, and have been doing so for the past 46 years. Of course, there are thousands of barbecue joints across Texas, many that have been around much longer and serve better barbecue, but few have a better story.

The History of Church Barbecue 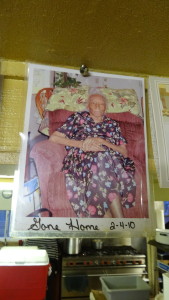 Annie Mae Ward started cooking barbecue in the front yard of the church in 1976.

One Saturday in the late 70’s, Deacon Ward, a painter and member of the congregation, along with a few other deacons, went up to the church to do some painting and other repairs. Annie Mae Ward, commonly referred to as Sister Ward, along with some of the other wives, set up a makeshift barbecue using a refrigerator rack open and a metal tub to cook lunch for her husband and the rest of the men working on the church.

I sat down with Reverend Clint Edison to learn how the Saturday afternoon Church barbecue evolved into a Texas barbecue staple. “She said that they couldn’t cook dinner, for people stopping wanting to know if they were selling barbecue,” recalls Reverend Edison, “and the next week they borrowed $50 from the church, and it’s been 46 years now.”

Along with other members of the congregation, the Wards sold barbecue out in front of the church until the Health Department forced them indoors. To keep the barbecue burning, the church raised the money and built a frame building from which to serve their hungry patrons.

After the Wards, Deacon and Sister Archie took over the operation, keeping true to Sister Ward’s recipes and Deacon Ward’s smoking methods. 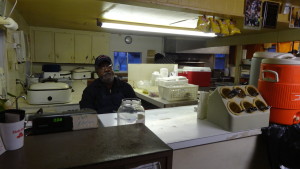 Reverend Clinton Edison took charge of the Church Barbecue in 2008.

Nowadays, the Reverend Edison oversees things. He came out of retirement to keep the place running, so to keep some semblance of retirement, he keeps it open only on Thursday, Friday, and Saturday.

I pulled up on a rainy Friday afternoon and parked in the church parking lot. I walked into the empty dining room. Reverend Edison was sitting quietly behind the counter and offered a friendly greeting and some commentary on the rain outside. Behind the Reverend, in the kitchen I could see someone handling a rack of ribs, so I decided pretty quickly to go with the two-meat plate. The ribs looked awesome and it’s blasphemy to not order brisket in Texas. Also, it’s a church, so no blasphemy, therefore the two-meat plate. I chose the beans and potato salad for my sides. 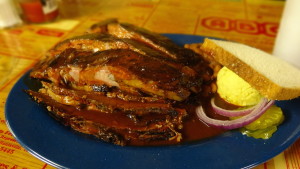 A two-meat plate with ribs and brisket, beans and potato salad. Too much food for so little money.

Here’s the thing: the barbecue was really good. The gigantic ribs were smoky and tender. The brisket had a deep smoke ring, and the leanness of the meat is counteracted by the sauce. But the experience alone is what makes New Zion Missionary Baptist Church Barbecue worth getting off the highway. When you’re sitting at the Church Barbecue’s dining room table in front of your giant plate of beautifully smoked meat, listening to Clint talk about Sister Ward cooking barbecue back in the early days, you understand how barbecue should be eaten. I’m not referring to the food. I’m talking about the experience that barbecue should be. You should instantly feel at home, and at Church Barbecue that’s exactly how you feel. It’s instant nostalgia.

Please do yourself a favor, and the next time you’re getting out of the state penitentiary, or if you’re just passing through Huntsville, stop by the New Zion Missionary Baptist Church and have some barbecue. Talk to Reverend Clint Edison about Sister Ward, the church, or the brisket. Then smile as you sit back in your chair, full of ribs and the satisfaction of enjoying barbecue the way God intended it.

Take Me to Church